The Robe of Skulls

The Robe of Skulls won the Stockton Children’s Book of the Year Award for 2008.

It is shortlisted for the 2008 Royal Mail award for children’s books in Scotland and for the Southwark Book Award 2008. 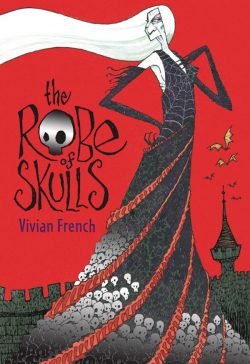 You are an incredibly prolific writer, having written around 200 children’s books of all different types and for all age ranges. How does The Robe of Skulls compare to your previous books? Is it the first you’ve written in the fairy tale/fantasy genre? What do you think accounts for the extreme diversity of your works overall?

I have written other fairy tales — and a long time ago I wrote some fantasy/fairy-tale plays — but I think The Robe of Skulls is a first in many ways. I’ve used all the stories I read and loved as a little girl and mixed them up with some new ideas and — I hope — humor. It’s the first book I’ve written where I really felt I was having fun each time I sat down to write.

As for the diversity of my work, I guess I’m interested in a whole lot of different things, and I just love people and finding out their likes and dislikes and how they tick. (Isn’t this called being nosy? I’d prefer to say I’m permanently curious . . . but take your pick.) I can get really excited by worms (I’m writing about them just now) in the same way that I love to try to make the emotions work in a picture book or write about little princesses at a princess academy. I’d go mad if I always wrote the same type of book for the same age range — I really need diversity to keep the ideas coming. Or maybe the ideas are diverse? I’m not sure which way it happens, but I do have to keep writing. I get extremely crabby if I go for more than a couple of days without sitting down at my computer. Ask my family!

What were your favorite books or authors as a child?

Anything with words in it. I was a compulsive reader, and I was extremely lucky because both my parents and my grandparents had walls stacked high with books. Some were very old: I happily read loads of ancient religious tracts and stories written for children in the 1900s and before; most of the children died terrible — but noble — deaths, as far as I can remember. Also, my father went to the library every week to choose more books for me and my two brothers; he read to us every night, so we got to know most of the children’s classics that were around in the 1940s, ’50s, and ’60s. I loved The Wind in the Willows and Alice in Wonderland.

My favorite books? One was a book that belonged to my mother. It was published in the 1920s, and it was called The Dawn Child, by Beryl Irving, and it was a truly amazing fantasy story. I also read and reread any fairy-tales I could get my hands on — Grimm, Hans Christian Andersen, Andrew Lang, Perrault, the Arabian Nights . . . I couldn’t get enough of them. I wasn’t really aware of authors until I was about ten or so, when I discovered Dickens — and he’s still a massive favorite.

How did you come up with the idea for The Robe of Skulls? Was there any particular inspiration, and how did the story evolve into the finished book?

I’d written — well, half written — a very bad book, and my editor and I agreed it wasn’t working. I deleted the whole thing and said I’d start again, but I couldn’t think of a single idea. I was getting really desperate, but one day I was in my kitchen and I heard a voice on the TV in the room next door saying, “Evil. I would say the answer is something to do with evil.” It was a very distinctive voice (belonging to the wonderful Geraldine McKewen, but I didn’t know that then), and it reminded me of a play I’d seen a long long time ago. In my head I could see the woman with this amazing voice wearing a long black velvet dress and sweeping across the stage in front of a castle, or something like a castle . . . and I thought, That’s it! I’m going to write a story about someone evil who longs for a new black velvet dress. And then, of course, I had to think of all the people who got in her way, and the story evolved from there.

In what ways does your background as a storyteller and actor affect your writing?

I’m obsessive about the sound of words and sentences; I always, always read everything out loud over and over again to make sure it flows and the cadences are right and the story feels as comfortable to tell as to listen to. And I do love using different voices; I always know what kind of voice a character has, even if I’m not entirely sure what he or she looks like — that’s for the illustrator to decide. Actually, I know how they move as well — if they shuffle or limp or stride. I think that goes back to my time as an actor.

How did Ross Collins’s illustrations for The Robe of Skulls compare with your visions of the
characters and settings?

Ross is my hero. When I was asked who would be my ideal illustrator, I said either Aubrey Beardsley or Ross. Beardsley was kind of out of the picture (having died in 1898), and I don’t think he could have done better than Ross anyway. As I said, I don’t have much of a visual picture of the characters and settings — my part is to give them movement and voices and thoughts and feelings. Ross illustrates them and there they are, and I could never imagine them any other way after I’ve seen his drawings.

The characters in The Robe of Skulls have such unique personalities and voices. Did you have any particular inspiration in creating any of them? Do you have a favorite character?

Lady Lamorna was inspired by Geraldine McKewen’s voice. (If anyone ever wants to make a film of Robe, I’d like to point out that Geraldine M. would make a startlingly wonderful Lady L.) Foyce came about because I was bullied at school by someone named Jane Foyce. She was incredibly beautiful, and I actually admired her hugely, but she was so like Foyce — mean and nasty, with a heart as hard as a frying pan. At least she was when she was ten. She’s probably delightful now. And Gubble? He just appeared out of nowhere once I’d thought of his name. My favorite character is either Gubble or Marlon the bat. Marlon was meant to be a minor character, but he refused point-blank to play second fiddle and took over. He’s now doing exactly the same in the next book.

Does that mean there’s a sequel to The Robe of Skulls in the works?

Yes — The Bag of Bones. It took a while to fall into the right shape, but Marlon’s sorting it out for me. Never underestimate the power of a determined bat.

Have you ever gone to extreme lengths to obtain a piece of clothing?

I did once go from shop to shop to shop all over London looking for a dress I’d seen in a magazine. It took me absolutely ages to find it, and I was so thrilled when I finally tracked it down . . . but I think I only ever wore it at my twentieth birthday party. It was impossible to walk in, and I kept falling over. Not the best way to appear cool and sophisticated and impress the boy of your dreams. He went off with my friend.